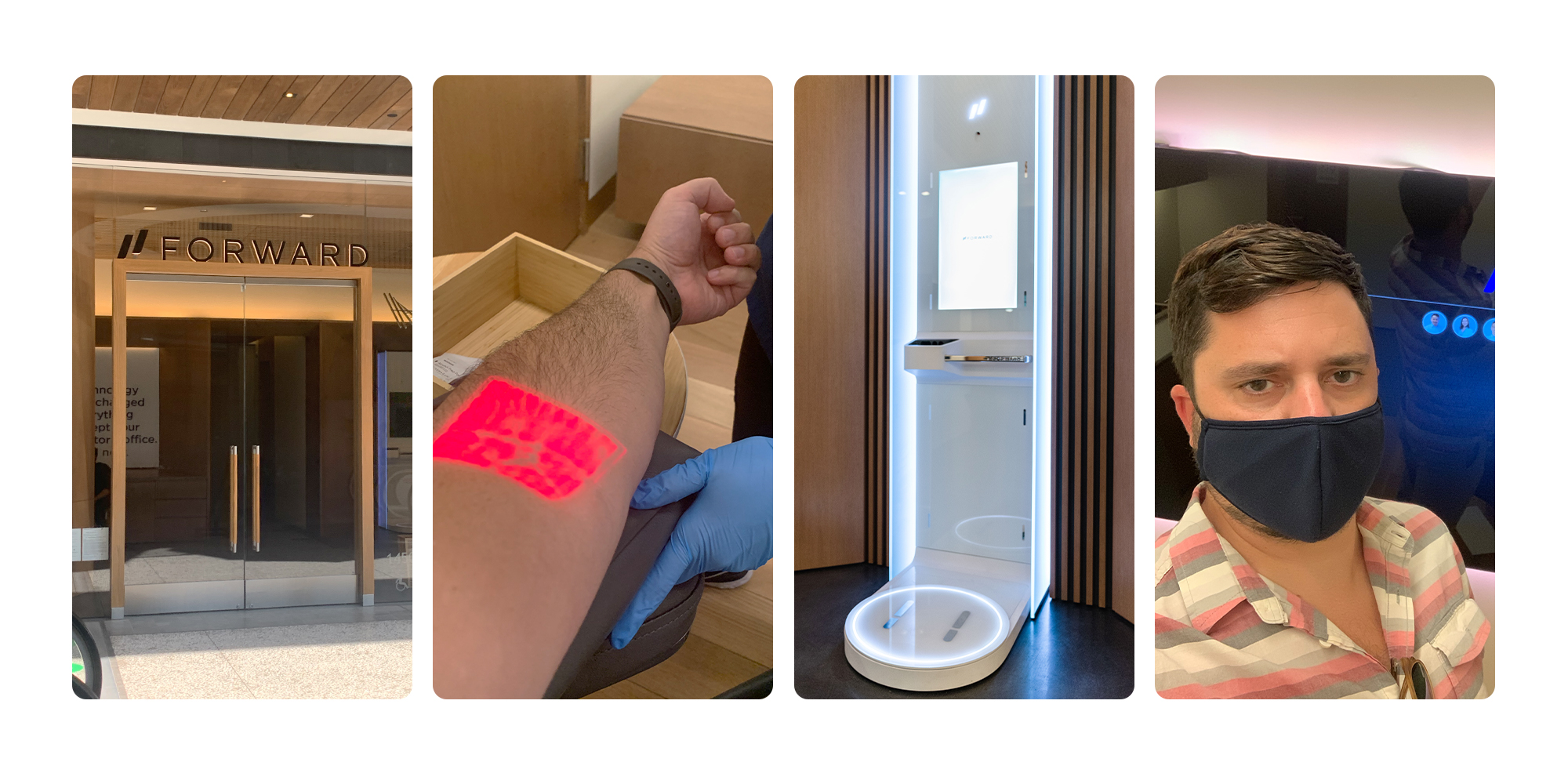 Despite what Ben Franklin once famously said about death and taxes, there are, actually, a number of other certainties in life. For one, the sun will rise tomorrow — that’s definitely going to happen. For another, some politician somewhere will put his or her foot directly in their own mouth. That one’s actually beyond certain at this point, considering it happens on almost a daily basis.

And a third certainty, although a bit more obscure, is nonetheless as pertinent to our daily lives as it ever has been: Going to the doctor’s office for a check up will be an absolutely snoozy, disagreeable — and inevitable — affair.

Right? Think about it: You go, you wait (and wait), you finally get herded into a little room that smells like a mixture of latex and rubbing alcohol and then a doctor comes in for five minutes, does a quick look-see at whatever’s ailing you, makes a few indecipherable (and possibly insulting?) chicken scratches on a chart and it’s over. What do you get to do as a reward? Pay a $20 copay (or, God forbid, an astronomical surprise bill) for the pleasure.

At least, that’s what I was certain going to the doctor’s was like for the first 36 years of my life — boring, uncomfortable and relatively expensive.

But, maybe Ben Franklin was onto something with the whole “death and taxes” thing, because after my baseline visit to Forward, I’m no longer certain that seeing a physician has to be the soul-sucking experience it normally is.

Allow me to explain.

Welcome to Forward: We Come From Space

Before I even stepped in the front door, it was obvious that Forward was different than any doctor that I had seen previously. I mean, let’s start with the fact that I didn’t have to call an office and make an appointment with a busy- and/or indifferent-sounding front-desk person, only to be told there wasn’t anything available for a month — instead, I quickly and easily made my appointment on my newly-downloaded Forward app (basically the one-stop shop for all things related to your Forward membership) for only a couple days later.

The next clue for me that this was not going to be a typical visit to your typical doctor’s office was when I showed up the day of my appointment. The all-glass clinic was in the Century City mall in L.A., nestled among major retailers like Apple (two doors down) and Nordstrom (50 feet away), to name a couple. Juxtapose that with where you might usually expect to find a doctor’s office, like behind some nondescript door down some nondescript hallway in some nondescript high rise or strip mall. No, this was something different — something, dare I say, cool. 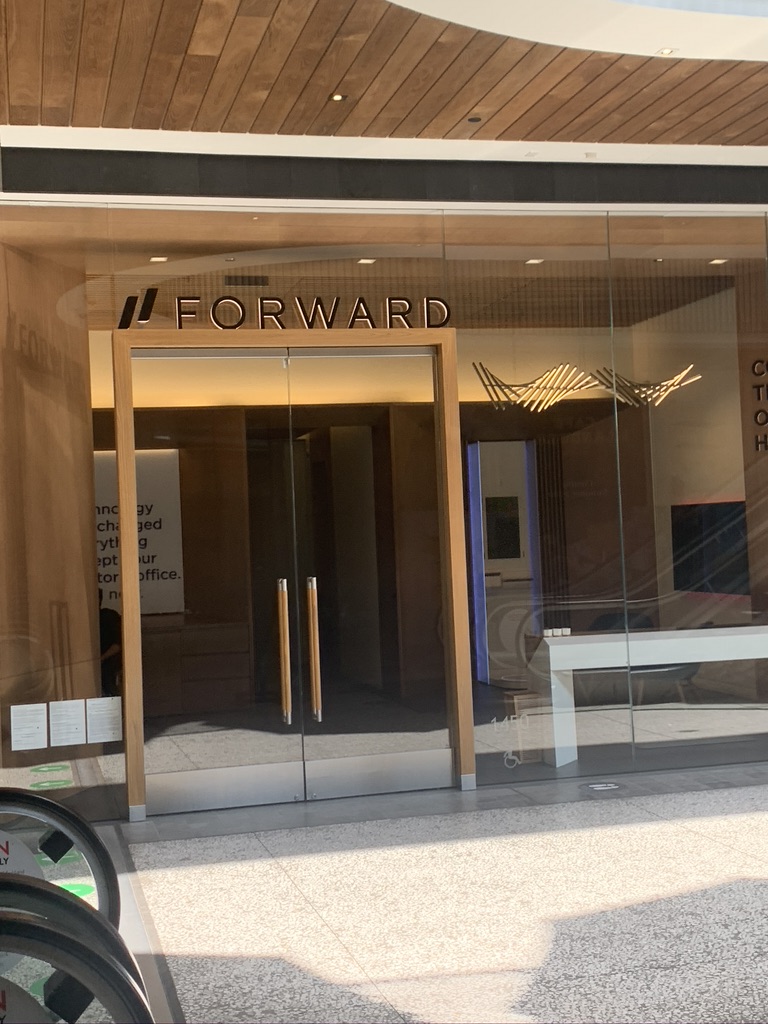 *Beep Boop Beep* You Have Just Been Body-Scanned

Walking in, the first thing I noticed is that there is no waiting room. Why would there be? I don’t think people actually do much waiting at Forward. As I mentioned above, your appointment is set in advance, and it’s clear that your visit will begin on time — which, in and of itself, is a bit of a mind-blowing departure from what I have long expected when I see a doctor.

I never signed a sign-in sheet, or filled out any forms asking me about my allergy to cat dander. Instead, a nice gentleman welcomed me in, found my name and appointment on an iPad and then shuffled me over to the first piece of Forward magic: The body scanner, a device that looks like it might be more at home on the bridge of the starship Enterprise than at a doctor’s office. In seconds, the machine takes your weight, your body temperature, your blood-oxygen level and a few more vital readings. How it all happens is anyone’s guess; all that was asked of me was to stare at a white dot on the TV-sized touch screen and place my hand in a little palm reader. 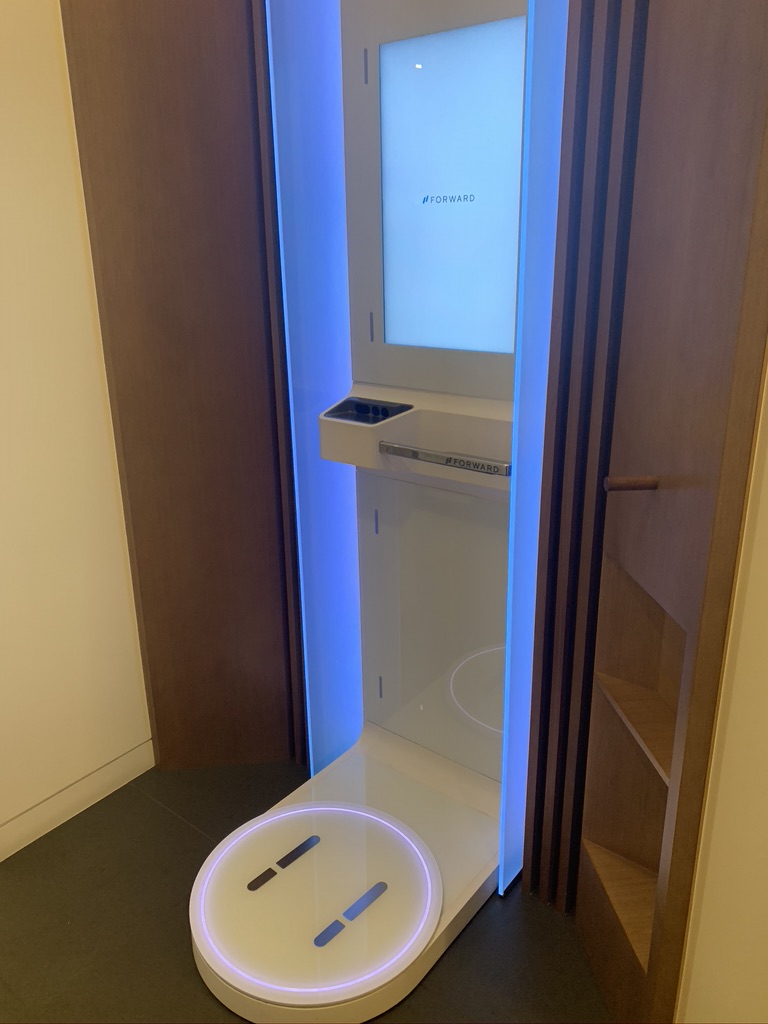 Only after it finished sizing me up and down was I led into the actual exam room, if you can even call it that. Because the space I found myself in had far more in common with a spa with its succulents and free bottles of expensive water than it did with any cold “turn your head and cough” exam room I’ve ever been in.

The Smart Screen Will See You Now

But succulents and bottles of free water aren’t even the most eye-catching thing in the room. That honor fell on the “Smart Screen,” a, well, smart screen on one of the walls. As I’d quickly learn, this is where Forward’s magic truly happens. When the doctor, Dr. Keith DesRochers, came in a few moments after I had my blood drawn, the Smart Screen sprang to life. On it was all my vital info like the weight, temp and blood oxygen levels I had just recorded on the body scanner, plus the results of the tests run on my blood, taken only minutes before: Hemoglobin, lipid levels, metabolic levels, cholesterol, glucose and so on and so forth. No waiting days or weeks for results — it was all there, and Dr. DesRochers began analyzing what he saw in no time. 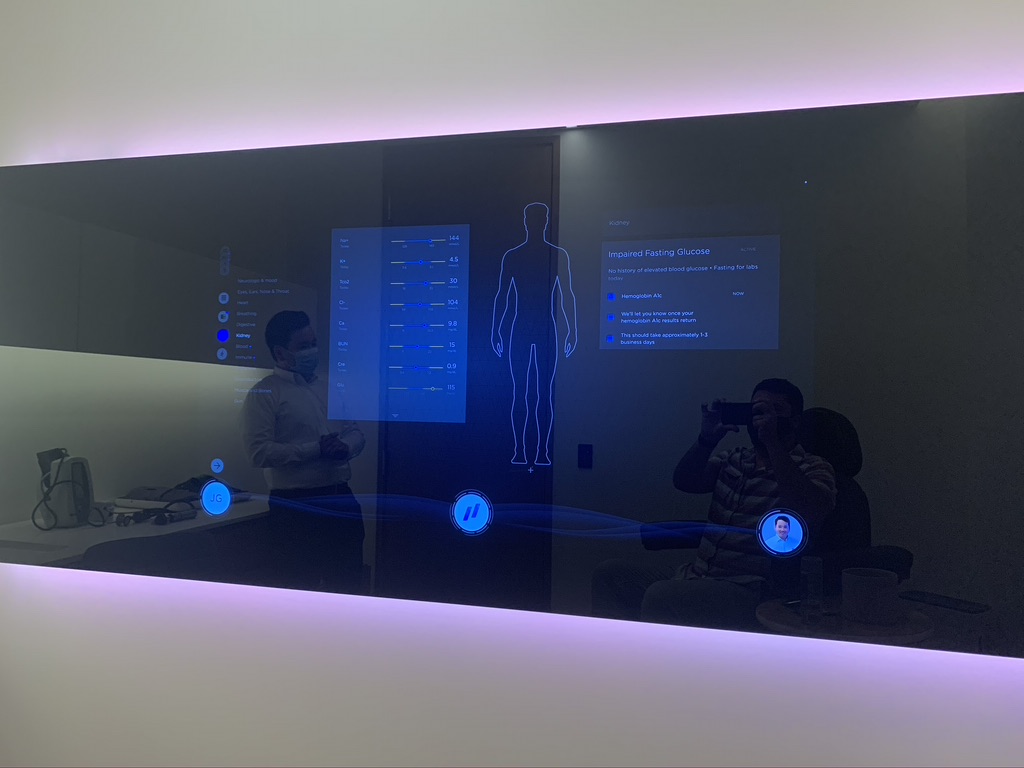 Incredibly, though, the Smart Screen wasn’t just window dressing. As Dr. DesRochers and I had an in-depth conversation around my health, lifestyle, diet and family history, the screen would record the highlights of our discussion in real-time. I could see my words being transcribed — and, more amazing than that, I could see I could see solutions to my issues being captured live on the screen. For example, my blood pressure was a little high; when I mentioned that I was on medication for it, my prescription info appeared in my chart on the screen. Dr. DesRochers was using the screen, too, manipulating the touch-screen interface like a seasoned news anchor on election night as we moved through all my test results and vital info. I realized that what made this so cool to me was the fact that all the things a normal doctor keeps from you and writes in their illegible handwriting on your chart was displayed for me to see — and to correct or add to, if need be. It felt like a collaborative tool, and thus, empowering. It sure beat wondering what kind of for-doctors’-eyes-only type notes were being scribbled about me behind my back.

It wasn’t just the Body Scanner, or the real-time blood test, or the Smart Screen that made me realize that Forward was clearly on to something special — it was the little things, too. For instance, the nurse who took my blood was really friendly, and not in a weird way, chatting me up while she stuck me with a syringe oh-so-gently. It was obvious to me that attention had been paid towards making sure that every Forward member is put at ease. Something that I, guy who hates needles, greatly appreciated. 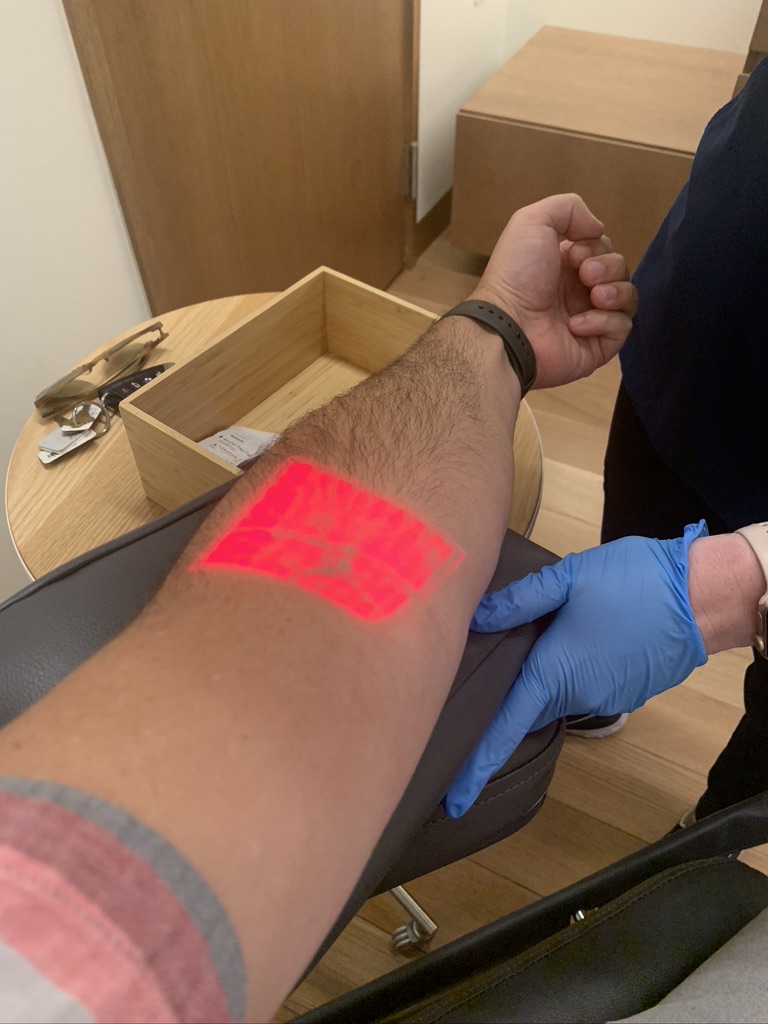 And then there were the really little things: The snack bar and fancy sparkling mineral water my nurse offered me after my blood was drawn; the cute Spongebob Band-Aid she put on my arm after giving me a flu shot. The small, thoughtful flourishes added up, all of which went a long way towards making me think this was the kind of visit to the doctor I could get excited about. And you can bet your bottom dollar I never thought I’d be saying that.

Walking out of the Forward office after my appointment, the uniqueness of what I’d just experienced was not lost on me. What Forward has done is made going to the doctor cool, if not downright enjoyable. But beyond that, Forward has also made getting primary care easy. Everything the membership includes (on top of the slick doctor’s visit) reinforces that idea, from the ability to chat 24/7 with your own personal care team, to the lack of copays or surprise bills just to see a doctor.

Bottom line is, there’s only one real way anyone is going to feel after becoming a Forward member: thoroughly impressed.